The police showed a list of names of targets for phone hacking to one of those whose voicemails were illegally hacked into by the News of the World. This happened in the lead-up to the jailing of the paper's royal editor and the private investigator he used. The individual, who I've spoken to, recognised the names of many familiar public figures and the stories that had appeared in the paper about them.

This revelation may add to the pressure for a further investigation into how widespread phone hacking was, and who knew about it. Already the Chairman of the Commons Media Committee, John Whittingdale, has said he may re-open his inquiry into the affair. 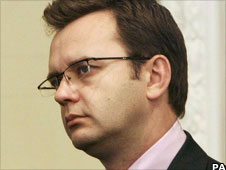 So, is David Cameron right to be "relaxed" about the implications for his Director of Communications, Andy Coulson?

Certainly, he must have known the risk when he hired Coulson just months after he had been forced to resign as the editor of the News of the World. At the time Coulson said he knew nothing about what had happened, although as editor he'd taken full responsibility for it. The Guardian is clear this morning that it has no evidence to the contrary.

The Tories' first reaction to the Guardian story was that it only contained one new revelation - that the News of the World had reached a huge out-of-court settlement with Gordon Taylor, the leader of the footballers union, one of those whose phones it had hacked into. As this deal was reached after Coulson resigned they argued that this was a story not about politics but the media.

Their hope was that many papers would steer clear of this story since their own journalists are alleged to have indulged in blagging - paying to obtain private data under false pretences - if not hacking.

They argue that the interventions of John Prescott, Charles Clarke and Alastair Campbell should be seen simply as a politically motivated campaign to damage David Cameron and one of his key advisers.

This morning the Tory leader has sought to distinguish between what Coulson did in the past at the News of the World and what he does now for him by declaring:

"I believe in giving people a second chance. As director of communications for the Conservatives, he does an excellent job in a proper, upright way at all times."

The problem he faces is that new questions are now being opened about the past.

It is now clear that phone hacking at the News of the World was much more widespread than previously thought; that it targeted senior ministers not just celebrities and that, if the Guardian is correct, at least one of the paper's executives knew about it. This is leading to calls - not just from Labour politicians - for Andy Coulson to answer questions about what he knew and to questions about whether he should be at David Cameron's side.

That is why I am sure that David Cameron is anything but "relaxed", as was claimed last night.

Coulson has already broken rule one for any spin doctor - "Never become the story". He's good enough at his job to know that this story will soon become one about David Cameron's judgement.