The return of politics' 'N' word

The country cannot afford it. It is no longer militarily necessary.

Tonight, Nick Clegg uses those arguments to become the first major party leader to argue that Trident should be scrapped at the end of its lifetime. 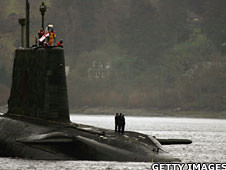 Every hour of every day, one of four submarines able to launch 16 Trident nuclear missiles is on patrol somewhere in the world.

Ministers warn they'll be obsolete by 2024 unless the country spends £20bn upgrading the system.

Under Sir Menzies Campbell's leadership, the Lib Dems argued that that decision could be postponed.

Now his successor insists that, given the squeeze on public spending, a "like for like replacement" is out of the question.

He argues that Britain's aim should be to scrap its nuclear weapons as part of a multilateral disarmament deal.

Meantime, Mr Clegg has asked Sir Menzies to look at cheaper alternative systems which, he concedes, will be less of a deterrent.

Rather curiously Nick Clegg was elected Lib Dem leader two years ago after clashing with his opponent Chris Huhne over his call for Trident to be scrapped - a policy he then warned was "in my view possibly illegal, costly and unstable".

Tonight, the Lib Dem leader told me that he had " changed my mind".

Not since the 1980s has an argument about nuclear weapons divided the major political parties. Not since then has it featured at an election.

Tonight it is clear that nuclear politics is back.