Survival but at what price?

Survival. That was Gordon Brown's sole focus on the morning after the night before. 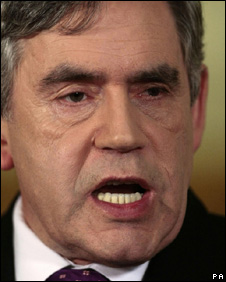 Hours after James Purnell's shock resignation from the cabinet and his call for his leader to stand down, the prime minister did persuade Labour's leading figures to back him rather than sack him.

He has though won it at quite a price. Alistair Darling stays as chancellor having made plain that he would rather resign than be moved as the prime minister had once planned. It was a sign not of Mr Darling's strength but Mr Brown's increasing weakness.

Peter Mandelson has a new title first secretary of state and a new role to match the reality that he is in effect Gordon Brown's deputy.

He is one of the growing number of unelected hand picked appointees that Mr Brown has come to rely on. It is hard to see how this lives up to Lord Mandelson's description that "we've seen the creation of a new government", it looks instead like the emergency filling of an unprecedented set of cabinet resignations.

Nevertheless Mr Brown has seen off the ministerial revolt and it is now up to backbench Labour MPs to decide whether they accept that verdict or conclude that their weakened leader should be finished off.