On the one hand, the Conservatives will be relieved that - just for the moment - Gordon Brown seems secure as leader. 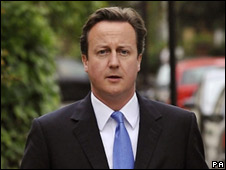 They believe that a new leader - say, Alan Johnson - would be a more formidable electoral threat.

On the other hand, they will be nervous. While they're likely to end the day having won overwhelmingly and having taken a handful of councils, their projected share of the national vote is not as good as it might have been.

They also know that there are swings in politics and that, having had a bloody few days, Gordon Brown has an opportunity to reassert himself.

At his Downing Street news conference, he is likely to address criticisms that he has no support by indicating that key members of his cabinet are still around him.

He is also likely to point to documents to be published in the next week - one on political renewal; another one on what are described as achievable and measurable targets on the economy, health and education - a kind of mini-manifesto for the next six months, if you like.

David Cameron has been around long enough and seen enough ups and downs to regard this as another marking post on the route to possible power - and to know that Gordon Brown has recovered before and he might just do it again.