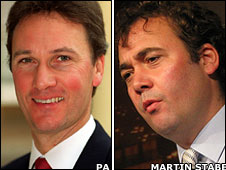 The next time the Telegraph runs a story about the prime minster's expenses could be interesting. Gordon Brown's new official spokesman will call the editor of the paper. They will speak on first name terms. No wonder, the two men are brothers.

Simon Lewis (left), who once worked for the Queen, is taking over as director of communications at No 10 at the end of July. His main task: to repair the dreadful damage done to his boss's reputation, in part by the actions of brother Will (right) over at the Telegraph. The long-suffering and ever-professional Michael Ellam gets his just reward with a return to the place he loves - the Treasury.