There will be much back-slapping in David Cameron's office this afternoon. 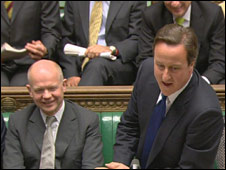 The Tory leader has struggled to get much attention for his call for a general election to elect a new Parliament to go along with a new Speaker. This, despite the fact that he is working in partnership with the Sun.

Today, Gordon Brown changed all that by warning that an election could cause "chaos". What did he mean by that, Mr Cameron demanded to know at Prime Minister's Questions.

The prime minister's reply was that he was referring to the chaos caused by a Conservative victory - thus appearing to suggest that he will not permit the electorate a vote because they might choose to change governments.

Mr Brown did go on to spell out the reasons he should have given for not going to the polls: namely, that this Parliament should sort out the current political and economic mess - but it was too late to stop the Tories claiming that he's running scared of the voters.