What they're not telling you

Spending cuts are coming, whoever wins the next election, however deep this recession is, whenever it comes to end. It does not suit politicians, however, to tell that stark truth. 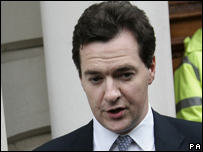 The Tories have come the closest - George Osborne has warned that the cupboard is bare. However he and the Conservatives don't want to fall into a trap which they can see Gordon Brown setting.

The prime minister always says that he wants the election to be a choice and not merely a referendum on his government. The Tories sense that what he really wants is a referendum on them and their spending plans. In other words, another election campaign could be dominated by debate about Tory cuts. Thus team Cameron is determined not to give them the ammunition by spelling out which cuts to public spending might be necessary.

Labour, in the meantime, behave as if cuts are avoidable but their own public spending figures make clear that they are not. The Treasury's plans for the next three years show spending rises at a third of the rate since they came to power and less than the average in the Thatcher years. "Ah, but," you may say, "they are still planning rises albeit small ones." However, the figures were produced before the depth of the current crisis became clear.

What's more, if schools and hospitals are to be shielded, other departments will have to suffer. The Institute of Fiscal Studies calculates the total departmental expenditure will be frozen for the next three years in real terms. Since costs and demands in those departments will not be cut, they will have to be cut elsewhere.

Just one example: the Treasury has already announced that the capital budget of the English NHS will be reduced by £1.4bn next year.

All this is not to deny that there is, and will be, an important debate between the parties about when to cut spending and by how much. The government will no doubt unveil another stimulus in its next budget. The Tories will no doubt oppose it. There will also have to be a debate on how and when to increase taxes. In other words, voters will still have to choose. It is, however, important for everyone to be clear just what we're choosing between.

Tonight on BBC Radio 4 at 8pm, you can hear a program called Decision Time that I've chaired in which senior civil servants, former ministers and experts in public finances discuss just how this tricky decision will actually be taken. Or you can listen again on BBC iPlayer.