You may have thought that Gordon Brown was too busy trying to save the world's economy to have much time for anything else. Think again. 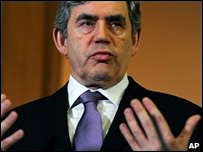 Today, the prime minister is offering to cut the number of warheads on our Trident submarines as part of an effort to kick-start the latest round of nuclear non-proliferation talks.

The number of warheads on Trident has halved since Labour came to power and the prime minister says he's ready to look at further cuts.

The numbers involved are likely to be limited. The real prize, for those sceptical about Trident, is to cancel the thing altogether or to reduce the number of submarines from four to a lower number. That would involve co-operation with the old enemy. No, not Russia. I'm talking about France.

There is no sign of that - but, in days when people are looking for more money to be saved for the public coffers, when there is a new atmosphere in the world thanks to the arrival of President Obama and when the Russian bear shows some signs of being tamed, perhaps this will be a moment when the debate about Trident reopens once again.

UPDATE, 14:18: There is little new in today's offer of a "grand global bargain" except the context and, as someone once said, context is all.

The 2006 defence White Paper [pdf] in which the government said they would renew Trident said:

"In this White Paper we are announcing a further 20% cut in our operationally available warheads. This leaves the deterrent fully functioning, with fewer than 160 warheads, but it means Britain continues to set an example for others to follow in our commitment to work towards a peaceful, fairer and safer world without nuclear weapons."

However, the arrival of Obama and the softening of Russia means that there is a new optimism about the possibility of renewing the Non-Proliferation Treaty.

One other bit of context. The fight is on for soft liberal votes. David Cameron pitches for them by protesting about torture whilst Gordon Brown does it by outlining a more progressive foreign policy.