STRASBOURG: Here in Strasbourg today - as in New York, Brasilia, Sao Paulo and Santiago in the days to come - Gordon Brown's message has been that the world should act together to stimulate the economy. 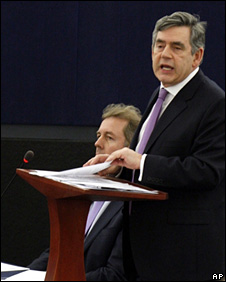 The message from here to the world, though, has been this: if stimulating the economy means more spending and more borrowing, it will be without the support of the Bank of England.

To stimulate or not to stimulate is a question with an impact not just on economics, not just on international relations, but also on domestic politics.

The argument about whether to burden the country with debt (as the Tories claim that Gordon Brown is doing) or to do nothing (as he insists their stance implies) is central to the argument which will run all the way to the next election.

It is an argument which will be given new force by the decisions the chancellor announces in his budget in a few weeks' time and it is one that the governor of the Bank of England just brought alive.