That's the prime minister's response to those who suggest he's come to Washington to get a sprinkling of the magic dust that surrounds the new president. 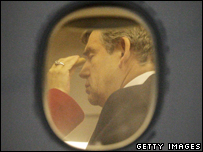 Gordon Brown is naturally delighted to be the first European leader to be granted access to the White House though Japan's Prime Minister won the race to be first into the Oval Office.

His policy objective is to secure President Obama's engagement in developing what he's dubbed "a global new deal" to combat the threat of depression. So far, his officials say, the new team at the White House has been too busy developing domestic policy to worry much about British ideas for an international economic plan to be unveiled at the London meeting of world leaders in April.

The Brown plan involves cross border co-operation on financial regulation, the closing of tax havens and the reform of financial institutions like the IMF. In short, they'll involve America ceding more power to the developing economies and allowing others to raise questions about the behaviour of Wall Street institutions. It's not yet clear if the Obama administration is ready for that.

Today's meeting is brief - just half an hour followed by a working lunch with officials. On landing in Washington we learnt that there is to be no formal news conference. Questions will be taken by the leaders in the Oval Office - perhaps, rather oddly, at the beginning of it.

What, if anything, does that tell us?

Old Washington hands say that the new administration is still bedding in. When you ask what the administration's policy is on the world trade talks you discover that they have yet to have their trade negotiator approved by Congress. So far, the president has only had one news conference since taking office.

Obama's focus is still on the domestic. Tomorrow's presidential schedule includes visits to the Departments of the Interior and Transportation. Oh, and the Boy Scouts of America are visiting the Oval Office. 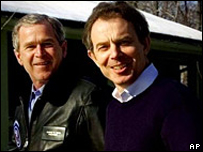 "Finally it tells us that today's meeting cannot be the equivalent of the Camp David "Colgate moment" at which Bush & Blair bonded. It is just a first step, albeit a significant one, in establishing what the White House now likes to call the 'special partnership' between Britain and America.

PS By a happy coincidence today's talks at the White House coincides with the broadcast of my Radio 4 programme on the Prime Minister who lost America - Lord North. The message telling him that he'd lost the battle of Yorktown and, with it, a continent took 5 weeks to reach Downing Street.