Ken Clarke was, as ever, telling it like it is. 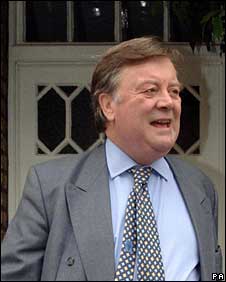 He was saying, in effect: "Look, unlike most of you, I know what it's like to be chancellor staring into a massive budgetary black hole. The only debates you have about tax are which to raise and the only ones on spending are what to cut. Back then - the early 90s - borrowing was 8% of GDP. Now it's predicted to rise to a staggering 11%. Therefore, any promise to spend any money at all can only be an aspiration."

He was reflecting a view held by a number of senior figures in the Tory leadership who also worry about sticking with a pledge to cut tax for the wealthy at a time when the party's trying to re-assure voters that the poor will not face an undue burden when taxes have to be raised and spending has to be cut.

David Cameron's answer to all this is simple. He's told his colleagues that "a promise is a promise" and that this is one of the few specific Tory pledges the public are aware of. To drop it, he fears, would reinforce public scepticism about the value of any political promise.

This is a classic lesson in the perils for an Opposition party of announcing specific tax and spending policies. New Labour types know this only too well - they remember John Smith's shadow Budget in 1992.

What sounds good at the time can look very very different when times change. You are then faced with the stark choice of eating your words and looking shifty or sticking with them and facing allegations that given a billion quid you'd rather spent it on the rich than on... (insert a worthy cause here).

PS. It looks like Tony McNulty could be in hot water since he seems to be saying that he used his parents' house in his constituency as a base and not as somewhere to sleep which is what the Additional Cost Allowance is meant to pay for.