Last night, as I took another gulp of red, I began to wonder if I'd had one too many when I heard ministers and those who hope to be ministers lining up to say that the law-abiding tippling majority should not be forced to pay for the binge-drinking minority. Surely, I thought, they're planning to slap more tax on booze anyway? 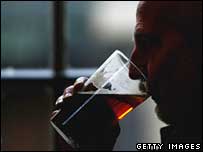 This, I can confirm, was not the product of an alcohol-induced haze.

The pre-Budget report increased the duty on alcohol by 8%. This, the chancellor said, was to offset the cut in VAT from 17.5% to 15%. However, when VAT goes back up at the end of this year there is no plan to cut alcohol duty again.

Even if there were, the last Budget hiked the price of beer up by 4p a pint, wine by 14p a bottle and spirits by 55p a bottle - that's 6% above the rate of inflation.

What's more, Alistair Darling announced a booze duty escalator when he announced that duties on alcohol will go up by 2% above inflation in each of the next four years.

The Tories' Social Justice Commission recommended that tax on alcohol should rise by as much as 10% to combat the binge-drinking culture producing headlines about 7p on a pint of beer.

Its author Iain Duncan Smith said there was almost an "epidemic" of binge drinking among children adding that "it is time for us to look at readjusting the price to bring it back in line with pricing that existed on alcohol before". The Tory leadership shied away from that but promised to hike the duty on alcopops and strong cider.

The Liberal Democrat leader Nick Clegg has called for the introduction of a minimum price for alcohol.

So, picture the scene. We're in the chancellor's office in the run-up to the first Budget after the election. Whoever's living at No 11 knows that money - lots of money - has to be raised in tax.

Do you think, just possibly, that a rise in the tax on alcohol might make it into the Budget speech given that it can be presented as a measure with all-party support designed to improve health and combat anti-social behaviour and not merely a tax rise?

Of course, the argument for a minimum price which Sir Liam Donaldson is making today - to stop shops selling booze at a loss - is rather different from that for a tax rise. However it's done though, the price of alcohol is on the way up.