It's Bash-A-Banker Week. Our MPs can hardly contain themselves.

Vince Cable wants to see them face the guillotine. Oh sorry, I forgot: he later said that that was a joke. 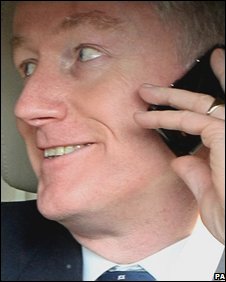 John Prescott is recruiting what he calls "an online army" to frighten them into submission and Hazel Blears wants women to storm bank boardrooms to clear out the excess testosterone. And all this before the "trial" of the "guilty men" - as many in Westminster hope they'll see when the Treasury Select Committee cross-examines Fred "the Shred" Goodwin, the man who made the RBS what it is today.

UPDATE 1300: As I suspected, there is a lot of political huff and puff about bonuses but few specific proposals for what should be done about them.

The prime minister, we're told, is "very angry". So angry that he wants bankers to consider waiving their bonuses voluntarily.

The Tory leader has attacked the government's slowness to act, declaring that "he who does the paying, does the saying", but he has not spelt out what more ministers could do. He too called on bankers to solve the problem, stating that they should "wake up and smell the coffee".

The Lib Dem leader has called the government's response "pathetic" and said he'd fully nationalise the failing banks. In the meantime, though, he says that bonus payments should be frozen in the semi-nationalised banks (ie RBS and Lloyds) whilst a new bonus structure is drawn up, based on shares and stock - not cash - which could only be cashed in after several years.

So why are the politicians finding rhetoric easier than concrete action?

All agree that the boards of semi-nationalised banks - RBS and Lloyds - shouldn't and will not get bonuses this year. All appear to agree that any ban on bonuses should not apply to the man or woman at the counter in a local bank branch.

All know that the real problem is those in-between - some of whom have contracts that guarantee them bonuses if they or their desk has performed well (even if their bank was saved from bankruptcy). RBS bought many businesses and now has them in 50 countries around the world. The body created by the government to look after the taxpayers' interests - the UKFI - is negotiating with RBS and Lloyds now.

All know that it will be easier to limit bonuses next year, as this can be made a condition for any bank taking advantage of the new plan to underwrite bank loans, so-called asset insurance.

All know that taxpayers picked up the bill to re-capitalise the banks last October after a weekend of emergency talks provoked by fears that some would collapse. Ministers promised that there would be "strings attached" for the billions of public money spent but, I'm told, "didn't have time" to work out which strings would be attached or how.

So, now our leaders are left sounding very, very cross but also rather impotent -rather as they have through much of this banking crisis.