Neither Gordon Brown nor David Cameron will be, well, stupid enough to be saying "It's the economy, stupid". These days it rather goes without saying.

They are, though, going to repeat again and again and again their analysis of what's wrong with the economy until you may feel you're being treated as if you were stupid. 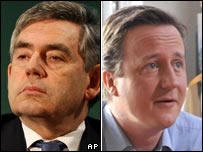 Thus this morning Gordon Brown's message at his jobs summit can be boiled down simply to - "It's the global economy, stupid". Or to quote what he is due to say directly :

"We are living through the first global financial crisis of the global age. We have witnessed nothing less than a worldwide failure of the banking system - a failure that began in America..."

You get the picture.

At around about the same time David Cameron will be making his own speech about the economy - launching not a summit but a poster. His focus will be on the damage that what he calls "the debt bombshell" will do to our children and our grandchildren.

His message, in other words - "It's Brown's economic policies, stupid".

Brown will accuse Cameron of leading the "do nothing Tories". Cameron will respond by calling Brown irresponsible. Labour say the Tories will slash spending. The Tories say Labour will hike taxes.

Each phrase will have been pored over, honed and message-tested in focus groups.

And what's more, both sides will seize on any evidence that others agree with them.

Thus, Gordon Brown travels to Berlin this week where he'll hail the German government's conversion to the idea of a fiscal stimulus. Thus, he heralds President Obama's plans for a massive stimulus of his own whilst his aides work frantically to get their man a visit to the Oval Office next month. And all this is but mere training for the day in April when London will host the G20 for a kind of economic Olympics at which Mr Brown will, no doubt, be awarded a clutch of rhetorical gold medals for his handling of the, you guessed it, global economic crisis.

Meantime David Cameron will point out that the man who said he'd saved the world couldn't save Woollies. He'll quote those like the heads of Next and M&S who have said that the VAT cut didn't work. And he'll claim that shop sales, plummeting house prices and rising unemployment prove that Brown's economic policies have failed.

Underneath the soundbites and slogans there is, of course, a very serious argument going on which will affect the lives of all of us for a long time to come.

This, though, is set to be a year of elections - local, European and, perhaps, even the general election. So, don't be surprised if pretty soon you may feel you want to shout "I've had enough point-scoring about the economy, stupid"

This is adapted from the script of my piece on this morning's Today programme.