Combine Bob the Builder and Barack Obama and what do you get? Nick Clegg or, at least, his latest economic offering. 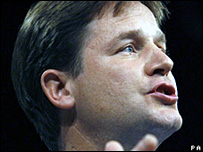 "Can we fix it? Yes, we can" is the Lib Dems message today. They are arguing that £12.5bn cost of cutting VAT would be better spent on fixing and building things.

Their "Green Road out of the Recession" proposals include:

• A five-year programme to insulate every school and hospital, with 20% completed in the first year
• Funding insulation and energy efficiency for a million homes, with a £1,000 subsidy for a million more
• Building 40,000 extra zero-carbon social houses
• Buying 700 new train carriages
• Reopening old railway lines and stations, opening new ones, electrifying the Great Western and Midland mainlines and beginning the Liverpool light rail network
• Installing energy and money saving smart meters in every home within five years

These are designed to be the sort of schemes which Obama describes as "shovel ready" - ie projects that can begin now without lengthy planning, design or logistical delays.

Interestingly, I sense that the Tories are beginning work on how to re-target public spending to prove that they can get more bang for the buck than the Treasury.

Both main opposition parties are bringing forward their plans just in case the PM does hold that an election in early 2009.