Null points from the Berlin jury

One minute, Gordon Brown says he's saved the world. The next, the German finance minister tells us that Mr Brown is, in fact, saddling "a whole generation" with debt by "tossing around billions" in a "yearning for the Great Rescue Plan" even though "[i]t doesn't exist. It doesn't exist!" 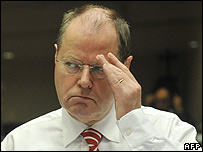 Speaking to Newsweek, Peer Steinbruck goes on to say: "I say we should be honest to our citizens. Policies can take some of the sharpness out of it, but no matter how much any government does, the recession we are in now is unavoidable", before adding that: "[w]hen I ask about the origins of the crisis, economists I respect tell me it is the credit-financed growth of recent years and decades. Isn't this the same mistake everyone is suddenly making again, under all the public pressure?"

Only a few weeks ago, Team Brown was telling us that Germany had proved the case for a fiscal stimulus by unveiling one of its own.

Now, however, we're told that the Germans are resisting calls for an EU-wide stimulus thanks to tensions in the Grand Coalition of parties of the left (the finance ministers from the SPD) and the right (the chancellor leads the CDU) that governs the country. It would be surprising if there were not tensions, not least with elections in Germany next year. However, there is one problem with this theory. Chancellor Merkl told her party congress this month that: "[w]e will not take part in a competition to outdo one another with an endless list of new proposals, in a senseless contest over billions".

Now, there are other theories being offered, too:
• having just suffered politically by raising VAT, the German government doesn't welcome comparisons with Britain where it's just been cut;
• the Germans fear that they will, as ever, be expected to foot the bill for any EU-wide stimulus;
• they have bad memories of the G5's Bonn summit in 1978 when they felt bullied by America to adopt an expansionary growth package which later fuelled German inflation;
• they have even worse memories of the rampant inflation which helped to create the conditions which led to the rise of Hitler.

There is, dare I suggest, another perfectly plausible theory. Mr Steinbruck believes what he says and does agree rather more with Mr Cameron than with Mr Brown, even though they come from the opposite ends of the political spectrum.