"This novice is waiting with interest to see how that novice performs". So said David Cameron at last night's launch of americaintheworld.com (a new anti anti-American campaign). 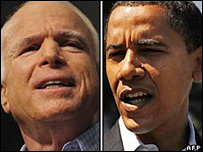 Thus the Tory leader made his claim to be the first British politician to seek to turn the expected result of today's US election to his own advantage.

Standby for Gordon Brown to cite an Obama victory (if it comes*) as evidence of a resurgence of the centre-left and a victory for belief in the role of the state, internationalism and global co-operation.

No matter that the Labour leadership originally threw their weight behind Hillary Clinton and the argument that it was experience that counts. No matter that the Conservative leadership hailed John McCain when he came to speak at their party conference or that both parties embraced the Bush foreign policy that Obama has run so hard against.

Everyone will want to be seen to be the new guy's best friend. This election will have profound implications for Britain not just in terms of policy but in shaping the national mood.

* With memories of Neil Kinnock being proclaimed our next prime minister in 1992 and with due reverence to the act of voting you'll note that I'm staying cautious about proclaiming the result before it's actually known.