Tory outrage at the arrest of Damian Green mirrors the anger that many in Labour felt when Tony Blair's aide Ruth Turner was arrested in the cash for honours investigation. Although their cases are very different there are important similarities. 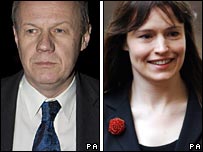 Also like Ruth Turner, he found a large number of police officers turning up on his doorstep instead of having an arranged interview. The justification will be the same in both cases - that the suspect could not be relied on to produce computer or documentary evidence that the police want to see.

There are plenty of people who believe that Green like Turner is unlikely to ever face successful charges, and there are plenty of parliamentarians who see another parallel with Churchill. He of course relied on a foreign office mole Ralph Wigram to tell him of the failure to prepare to stand up to the Nazi threat. Damian Green's revelations may be on a rather less dramatic scale but they raise real concerns about the capacity of parliamentarians to do their job.