The prime minister has just warned that Britain faces deflation next year.

Now a period of falling prices might sound rather attractive. Until you think about, that is.

A sustained period of falling prices leads people to postpone spending as they wait for prices to fall. Businesses that cannot sell their goods cut jobs. Prices are cut to stimulate sales. A deflationary spiral results and it's very hard to escape it.

In addition, deflation also increases the cost of debt. Think about it in terms of, say, a mortgage. Normally inflation means that the amount you pay back in a few years time is less in real purchasing terms than when you took your mortage out. Deflation reverses that.

Ask anyone who's Japanese and they'll tell you of the horrors of deflation in the 90s. Anyone old enough could tell you about the Great Depression of the 30s. 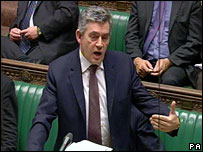 The political significance of the D word, of course, is that Gordon Brown can use the fear of it as another justification for trying to stimulate the economy via borrowing to cut taxes and spend.

The Tories' best argument is that interest rate cuts and the fall in the value of sterling do a lot more to kickstart the economy than a stimulus of a few billion here or there, particularly when that few billion has to be repaid.