The truce is over

The truce is over. The Tories have had enough of hearing that Gordon Brown is a super hero and they've decided to try to bring him down to earth. 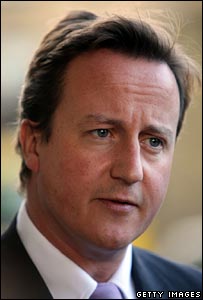 In a speech this morning, David Cameron condemns what he calls "the complete and utter failure of Labour's economic record". The American sub-prime crisis is only half the story of the economic crisis he says. Just as important was the failure, "a British failure", to regulate British public and private debt. The Tory leader promises to usher in an era of responsibility with greater control of both public spending and private debt.

So why this speech now? Is it because the Tories have been panicked by Gordon Brown's recovery? Certainly, in an interview I've just done with the Tory leader the question he appeared to like least was the one when I pressed him to give personal credit to the prime minister for his handling of the past couple of weeks.

In his speech Mr Cameron comes up with another of those metaphors that he likes so much to explain why the political truce is now over. He says that it was right to man the hoses when the house was on fire - in other words to back the government in a crisis - but that it's now also right to see who built the house. Is this the same accident-prone house that only recently had a broken roof? My feeling is that this metaphor's unlikely to last quite so well as the last one.

What matters much more, of course, is whether the Tory leader's argument proves sustainable. Can he convince people that Gordon Brown is the architect of their problems rather than the failures of the global financial system?