The responsibility of borrowing

Is Gordon Brown gambling on spending and borrowing to get us through a recession? That's certainly what he and his chancellor have led many people to believe. It is not, however, what the prime minister actually said this morning. Nor does it appear to be what the government's actually planning to do. 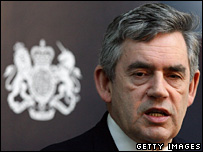 As so ever in politics, context is all. Last week saw the release of figures showing borrowing at a record high. For years political journalists have had fun watching and highlighting the moment in Brown budget speeches when he galloped through borrowing figures which were far higher than he'd projected.

This week will see Alastair Darling, the man he appointed to succeed him, finally being forced to admit in a speech that Brown's much vaunted fiscal rules have already been broken and will have to be torn up and replaced with a new fiscal framework. That's why ministers have spent the past few weeks making the case for borrowing as a virtue rather than a vice and it's why Gordon Brown said this morning:

"The responsible course of government is to invest at this time to speed up economic activity."

However, the prime minister also went on to say that:

"As economic activity rises, as tax revenues recover, then you would want borrowing to be a lower share of your national income."

That's because there is another part of the context - the reaction of the financial markets. The pound is on the slide and the Shadow Chancellor, George Osborne, is not the only one saying that that's because people are anxious about the state of the government's finances.

Borrowing, as any school student of economics knows, rises automatically in a recession since tax revenues shrink and benefit payments soar. In theory, governments could cut spending or raise taxes to avoid this. No serious economist or politician I know of is arguing for this. The Tories describe this as "a necessity not a virtue" - a consequence, in other words, of past failure, not a strategy for future success.

So far, Gordon Brown's argued that spending should be maintained not increased. So far, the Treasury's said it's looking at re-prioritising within existing spending totals and not re-writing those totals.

The unanswered question is whether they will go a bit further. After all, they had to borrow to pay for that £2.7bn tax cut to end the political crisis over scrapping the 10p tax rate. What, the argument might go, is a few more billion between friends? Wouldn't a little bit of extra borrowing put the Tories in the tricky position of either opposing an electorally popular goodie - a new handout here or the cancellation of a planned tax rise there - or simply saying that they would have done the same as Labour.

What ministers cannot afford to do is to appear reckless about borrowing or spending. Thus, they need to convince the markets that they have a plan to reduce it in the future. On this debate, the Tories are on firmer ground. They can fairly point out that they have argued for years that the government was living beyond its means and that they have come up with a big new idea - an office of budget responsibility - to keep spending under control in the future.