The rebirth of Gordon Brown?

The death of the banks (at least as independent institutions) has, it would appear, been accompanied by the rebirth of Gordon Brown. Not only has his bank rescue package been backed by all political parties at home but it has also inspired similar plans in the EU and in the United States (once it was clear their own plan had failed to end the rout) 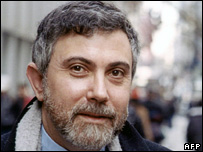 Indeed, the man who was today awarded the Nobel prize for economics, the American economist Paul Krugman, declared in today's New York Times that the Brown/Darling plan had "defined the character of the worldwide rescue effort, with other wealthy nations playing catch-up" and praised the two men for showing a "combination of clarity and decisiveness" which "hasn't been matched by any other Western government".

This bounce in the market in Browns and indeed, Darlings too, has prompted the Conservatives to re-open hostilities and to side with the British people who, they claim, have "been handed the bill for boom turning into bust".

The Lib Dems too have warned of governmental hubris. What they both believe - and are surely right too - is that the politics of recession could be much less benign for Gordon Brown than the politics of the immediate crisis.

The political fallout of both events is, of course, no more predictable that the economic fallout. It would be unwise to speculate too much.

That surely is one lesson for all of recent events.

What can be stated with total confidence is that the prime minister himself feels more confident doing the job that at any time since he got it.