For the latest update on this row, go to the bottom of this entry

It is a tale of our times - a tale of how a hugely rich financier Nat Rothschild, the son of the fourth Baron Rothschild, brought together the Tory shadow chancellor, the man who would return to British politics as Gordon Brown's new business secretary and a Russian billionaire at his holiday retreat on the Greek island of Corfu. Oh, yes, and lest I forget, the media magnate Rupert Murdoch joined them as he was staying near by. 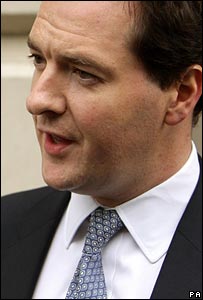 Our story begins and ends with George Osborne. On returning from his hols he couldn't quite resist telling friends of the "poison" about Gordon Brown which, he alleged, Peter Mandelson had "dripped into the ear" of anyone listening. A story which moved from amusing gossip to the front pages after Mandelson's shock return to the cabinet.

Next came questions fuelled by the Tories about Peter Mandelson's relationship with Oleg Deripaska, the Russian whose billions come from controlling the world's largest aluminium producer. Hadn't he stayed on his boat? Osborne knew he had. Weren't they friends? Osborne knew that too. Wasn't this a conflict of interest given that, as EU Trade Commissioner, Mandelson had a role in setting tariffs for the aluminium which made Derpaska so rich?

Mandelson's first instinct was to refuse to answer questions about what he said was his private life. He knew all too well that the way the media can keep a story running is to publish a list of "unanswered questions". This approach did not, however, kill the story. Nor did the backing of the EU Commission which declared him not guilty of a breach of the rules. So far, no evidence has been produced that he broke any rules but there's little doubt that had he behaved this way as a cabinet minister he would have been in breach of the ministerial code which advises against perceived conflicts of interest.

When the questions continued, it's clear that Mr Mandelson's friend, Nat Rothschild, became angry with his old Oxford chum George Osborne for breaching the privacy of his summer party. It is this that has led to this morning's allegations, printed in the Times, that Osborne had visited the boat of the Russian billionaire with the Tory fundraiser, Andrew Feldman in order to "solicit a donation". What's more, Mr Rothschild alleges, Feldman later proposed that the donation be "channelled" through one of Mr Deripaska's British companies. Donations from overseas are, of course, illegal.

Both George Osborne and Andrew Feldman vehemently deny these allegations. The Tory party issued legal warnings to the Times last night which led to Nat Rothschild re-writing the letter in which he made his allegations. The Tories claim that this shows his version of events is unreliable. The Times insist that he was merely "clarifying" his allegations. My colleague Robert Peston revealed this morning that there are witnesses to Rothschild's story who are willing to appear in court if necessary.

Only three facts are undisputed here - the Tories did visit the boat, at a later stage a donation to the Tory party was discussed but no donation was, in fact, ultimately made. The rest, for now, is murky.

What can't be disputed is that this raises real questions about the judgement of the Conservative Party in pursuing allegations about Peter Mandelson's dealing with a man who they themselves had discussed money with.

There's an old saying in politics - if you get into the gutter you have to be prepared to get dirty.

PS. It's just been drawn to my attention that today is Peter Mandelson's birthday. You don't think that Nat Rothschild thought that this was the perfect present, do you?

UPDATE, 10:45AM: Sources close to Oleg Deripaska have told me that the Russian billionaire rejects the suggestion that he initiated conversations with senior Conservatives about making a donation to the party.

This comes in response to strenuous denials from the Conservative Party of allegations that they had "attempted to solicit a donation" from the billionaire.

The allegation was made by the financier Nat Rothschild who arranged a meeting between the shadow chancellor, George Osborne and the Tory fundraiser, Andrew Feldman with Mr Deripaska in Corfu last summer.

What is not disputed by those involved is that a meeting took place on the billionaire's yacht; that Nat Rothschild and Andrew Feldman discussed a possible donation to the Conservatives by Mr Deripaska in September and that, in fact, no donation was ever made. What is in dispute is who initiated the conversation about giving money to the Tories.

Sources close to Oleg Deripaska say that he has never donated to any British political party and never intends to.

On the one hand, he denied soliciting money from the Russian billionaire or talking about it with Oleg Deripaska or, of course, receiving any money. But, and it is a very big but, he did not deny my suggestion that he had discussed Mr Deripaska's possible donation with other people.

You would expect the shadow chancellor to avoid all conversations about how and whether to accept any donation. Mr Osborne has answered specific allegations made by Nat Rothschild but left unanswered big questions about his judgment.

UPDATE, 03:40PM: The BBC has learnt that the shadow chancellor, George Osborne, had a discussion with the financier Nat Rothschild during which the possibility of a donation from the Russian billionaire Oleg Deripaska was raised. The conversation took place at Mr Rothschild's villa before Mr Osborne visited the billionaire on his yacht. Other guests at the villa witnessed the conversation.

Earlier today Mr Osborne denied allegations by Mr Rothschild that he had solicited a donation from Mr Deripaska. However, he did not deny that he had been involved in conversations with others about a possible donation from the Russian billionaire or on his behalf from any of his British companies.

This is the transcript of the question I put to Mr Osborne and his replies:

ROBINSON: Mr Osborne, can you just clear this up? Were you at any stage involved in conversations about a donation with this Russian billionaire or indeed on his behalf from any of his British companies?

OSBORNE: Well, a very specific allegation has been made that we solicited a donation from Mr Deripaska and I want make it absolutely clear that we neither asked for money nor did we receive money.

ROBINSON: But I've asked you a general question about whether you were involved in conversation at any time about a donation from him or his companies?

OSBORNE: People make suggestions on behalf of other people about donations to the Conservative Party like all political parties but, we have very rigorous checks and we make it absolutely clear that donations have to be legal and I come back to this central point which is we neither solicited a donation to Mr Deripaska, we didn't ask for the money and we didn't receive any.

The shadow chancellor is expected to publish a detailed account of his dealings with Nat Rothschild and Oleg Deripaska later this afternoon.