The Tory leadership did not attend last night's dinner to celebrate the 20th anniversary of the Bruges speech. They were not there to pay homage to Margaret Thatcher or to join in the chants of "10 more years". They did not hear Norman Tebbit's call on them to promise a referendum on whether Britain should stay in a Europe re-moulded in the Lady's image or have done with it and get out. 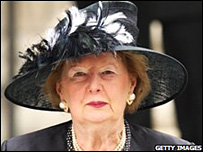 You can be sure, however, that they had spies there report back on who went (only a handful of Tory MPs went including Sir Nicholas Winterton, Andrew Rosindell and Roger Gale), what was said and the mood on the evening. Team Cameron knows all too well that Europe is a "ticking time bomb" for the Conservative Party as the Shadow Foreign Secretary, William Hague, likes to put it.

If the Irish government decides to ask the Irish people to vote again on the Lisbon Treaty, if that vote's held before a British election and if they say "yes" the Tories will have to answer the question - now what will you do? There are enough "ifs" for the party to insist in public that they're not prepared to answer a hypothetical question. Privately, however, work is going on about what to do if the Lisbon Treaty's ratified and the Tories form the next government.

All they've said so far is that they wouldn't let the matter rest. William Hague's most important task is to defuse the time bomb. He needs to find a way to negotiate a new relationship with the EU - tricky enough in itself - without destroying David Cameron's first few months in office either by alienating his fellow European leaders or leading his party to feel they've been betrayed.

Lord Tebbit last night made what he, no doubt, regards as a modest proposal:

"I hope that the Conservative Party will set out a negotiating brief that the next Conservative government will take to Brussels early in its next term and that it would within two years of the next election present to the British people the outcome of its negotiations.

"We need to show Thatcherite courage and determination to lead the country along that path."

It is a recipe for a bruising negotiation in which Britain would have few if any allies; a risky referendum in the mid term of a parliament that looks set to be dominated by the need to cut spending and raise taxes; and a possible vote for Britain to leave Europe. It's a recipe which, I suspect, will give a painful dose of indigestion to those who missed last night's dinner.