Back to the future again

"Eee, I'll go to the foot of our stairs." Forgive me, for that's what they say in Macclesfield when they're gobsmacked, and I'm gobsmacked. 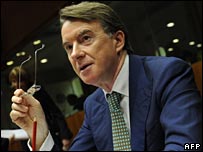 Peter Mandelson is back. Gordon Brown, for so long said to lack courage and to be unwilling to reach out to his enemies in the Labour Party, has now confounded his Blairite critics by putting Mandy back into the cabinet.

"He's New Labour to his core, pro-business and tough on the unions. It will light a blue touch-paper under the government", one cabinet minister told me.

Expect a lot of gloomy faces amongst those on Team Brown who saw their life's work as opposing Mandelson and all those close to him.

PS. In case you've not seen, John Hutton moves from BERR (Department for Business, Enterprise and Regulatory Reform) to Defence.

I expect, but have not had confirmed, that Baroness Ashton will be off to Brussels to be EU commissioner. If so, a new Leader of the Lords is needed.

In addition, Gordon Brown's party spin doctor, Damian McBride, is being pulled back into the Downing Street backrooms. He's liked by political journalists but loathed by Blairites who dubbed him Damian McNasty and blamed him for malicious briefings on behalf of his boss. His replacement is to be Justin Forsyth, former Head of Policy and Campaigns at Oxfam, who was Gordon Brown's (and before that Tony Bair's) advisor on international development. Forsyth will be less matey and less gossipy with the press than McBride, and will reassure those who had demanded this change.

So, what's behind Gordon Brown's moves? The economic challenge, the strategic challenge and the threat to his position.

Downing Street are presenting this as a strengthening of the cabinet to face the economic crisis - drawing on Peter Mandelson's global experience and contacts whilst creating a new department to handle energy.

It's also clear that the PM wants political ballast - Mandelson brings huge strategic and presentational experience whilst Margaret Beckett has long experience of government and the stature to knock ministerial heads together.

Finally, and crucially, Brown is trying to shore up his position in the Labour Party. The message to the plotters is, in effect, if Mandelson is on my side, isn't it time you were? The people that founded New Labour - Brown, Blair (who's in regular contact with him), Mandelson and Alastair Campbell - are said to have put aside their differences to work together again.