As you ponder the half-a-trillion pound and counting - that's a five and 11 noughts, by the way - cost of the mother of all bank rescue plans, you may not be feeling that cheerful. Worry not. 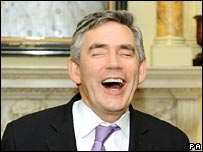 The prime minister's maintaining the spirit of the trenches. On the evening after the long, long night before he delivered a speech to celebrate the publication of the Power List - a list of the most influential black men and women in the UK.

When someone's mobile phone interrupts his speech he joked "I don't know if another bank has fallen...", to guffaws of laughter before adding "you'll be pleased I'll not be giving financial information this evening".

Everyone at Westminster has noticed that he's grown in confidence and stature during this crisis. Could he even be enjoying it?