If it were not for the small matter of a global financial crisis or the vital debate over what Peter Mandelson did or did not say over the hummus to George Osborne, all eyes would now be on the next stage of the debate about extending detention without trial. It is clear this morning that 42-days is politically dead. 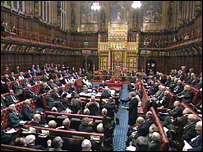 Ministers have told Gordon Brown that when the proposal comes to the Lords - probably next Monday - it faces defeat by a three figure margin.They have also warned him that to use the Parliament Act to drive the bill through would be politically suicidal.

For now, the official line is that the prime minister still believes in 42-days and that ministers will try to persuade the Lords to back him.That line will last only until the Lords kick the idea out. It is possible that some form of extended detention without trial may be revised and revived for Labour's next election manifesto.

A clear sign that the game's up came in the reshuffle when two of the ministers most closely involved were moved -Tony McNulty's left the home office to go to DWP and Baroness Ashton is leaving the Lords front bench to replace Peter Mandelson in Brussels.

Even if the PM had not made up his mind, an article by Andy Hayman, Scotland Yard's former Head of Anti-Terrorism, in today's Times would have made it up for him. Hayman writes that :

"It would have been my job to make these proposals work but just trying to understand them gives me a headache... Let's get real. This will just not work... The bill is about politics and it won't work."

He adds intriguingly that :

"I was astonished when, in July last year, the government floated the idea of revisiting the detention limit. I remain curious as to what prompted this rethink."