If you thought you knew what the Liberal Democrats stand for, think again. That was the single, simple and relentless message that ran right through this conference and the leader's speech. 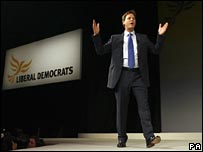 Nick Clegg has taken a party known for years as "those rather nice people who want to spend more and tax more to pay for it" and is trying to re-brand them as "those tough people prepared to make the cuts to give you your money back".

This - he insists - is not merely about political re-positioning. It is, he claims, a vital part of an economic recovery plan. It is nothing if not audacious. Rhetoric that would induce ecstasy at a Tory conference was greeted here with polite applause and occasional bemusement.

This young, charismatic new leader - who wore a blue tie and strode about the stage without any notes - has always rejected those who've dubbed him "Cameron Lite". Today he sought to sell himself as Super-strength Clegg. His party have swallowed it but will the country?