Arise Sir Keith or will it be Lord Vaz or Governor of Bermuda? 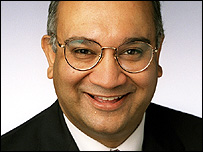 What began as a barbed joke at the expense of the chairman of the Home Affairs Select Committee, Keith Vaz turned into a significant exchange at today's Prime Minister's Questions.

Just nine minutes before PMQs began the Telegraph dropped a cracking story about a letter sent by Labour's Chief Whip to Mr Vaz .

It was written the day after the knife edge vote on 42 days detention without charge which Gordon Brown only just won and, according to the Telegraph, read as follows:

"Dear Keith...Just a quick note to thank you for all your help during the period leading up to last Wednesday's vote. I wanted you to know how much I appreciated all your help."
"I trust that it will be appropriately rewarded!...With thanks and best wishes, Geoff."

David Cameron - who'd clearly been forewarned about the story - used it to demand to know what plain old Mr Vaz, for now at least, had been promised. Of course, we'll probably never know. What's more, if anything was promised or even hinted at it's much less likely to be delivered now.

I suspect that Geoff Hoon will say that he was teasing Mr Vaz after the jokes that had been circulating around the Commons about what had been promised.

What may prove more significant in the long term is the PM's repetition of his claim that "no deals" were done to secure victory. If, as they expect, Northern Irish MPs soon greet extra government investment or a concession on this or that government proposal it is a claim that will be scrutinised very hard.

Of course, deals are done all the time in Westminster in the search for coalitions needed to win tight votes (although they're usually implicit rather than explicit so as to be deniable.)

This begs the question - why when first asked about deals did Gordon Brown offer up yet another hostage to fortune rather than simply declaring that he'd done what was necessary to make the country safe whilst dismiss talk of deals as Westminster village tittle tattle?