It's the economy that counts

When it comes to the economy David Cameron is in the position of the Irishman in the famous joke. Asked for directions he replies: "If I were you, I wouldn't have started here". 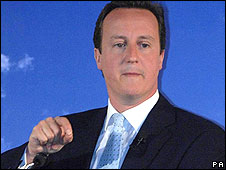 So it was, that on the radio this morning, previewing his speech to the CBI, he answered most questions with that phrase, yes, you know the one - the government should have mended the roof when the sun was shining.

The Tory leader hurriedly corrected himself when he heard that he was about to describe his speech as a full blown economic plan, adding the phrase "a first go at".

The reason for this is clear; beyond vague talk about changing the bankruptcy rules, his speech today spells out existing Tory policies - about cutting stamp duty for the young and about the so called fuel tax stabiliser.

The Conservative leader studied economics at university and was political advisor to Norman Lamont during the last major economic downturn. He will now know that this will not be an economic plan that takes him into government, if he gets there, and that the Tories will have to be thinking about what on earth they would actually do if they inherited an economy that was growing very slowly or worse still in actual recession.

Most telling in the interview I thought was Mr Cameron's reply when asked whether whoever was in government they would have to put up taxes. He replied: "I hope that's not the case." "Hope", I notice, rather than "believe".

The next great economic debate in the Conservative Party will not be the one that David Cameron and George Osborne have already won - about changing Labour's spending plans in the short term - but whether substantial tax cuts are needed, not for political reasons but to stimulate a faltering economy.