What on earth did he mean by that? That is the only question that matters about today's extraordinary intervention by David Miliband in the debate about how the Labour party recovers. 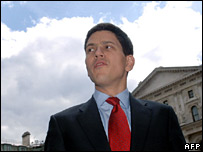 Now no doubt, he will say that we should understand him to mean precisely what he wrote and not a word more. Why then do I and most political observers refuse to take his article at face value? Quite simply because in politics context is all.

Consider the choices that faced the foreign secretary at a time when there is furious speculation about a challenge to Gordon Brown.

Firstly he could have called for that speculation to stop and for people to fall in behind the leader. He did no such thing. Indeed Gordon Brown is not even mentioned in his article.

Secondly he could have said nothing at all and simply gone on holiday. But oh no, he chose a third option. To set out the way forward for the party without doing anything to prop up his leader's position.

So what on earth did he mean by this? Not, I'm sure, an open challenge to Gordon Brown. The foreign secretary has no intention of trying to bring him down. On the other hand he does want to make it clear that in this leadership contest - if there is ever one - he will not hesitate, he is ready for the fight. And he will represent the candidate promising change.