This resignation is quite extraordinary and without precedent that I can think of in British politics and means that politics is now utterly unpredictable.

(Here was my initial reaction on the BBC News channel just after Mr Davis's statement.)

David Cameron has lost control of his strategy. This was not his decision. He was not asked for his agreement. He was informed late last night by David Davis that he was going to do this come what may. That he was going to resign and trigger this campaign. This is not a campaign that Mr Cameron wants, it is not part of his strategy and indeed, I am told by senior Tories who know Mr Cameron well, that this was David Davis' personal decision and will be his personal campaign. 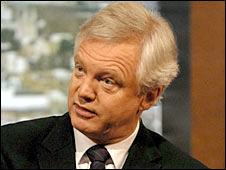 Now Mr Cameron has moved very quickly indeed to replace Mr Davis insisting that there are lots of issues on which the Tories have to have opinions and views and stances other than 42 days. But interestingly he's kept his options open. Dominic Grieve is personally very close to David Davis and they agree entirely on the civil liberties agenda. It's therefore possible that if Mr Davis wins on this issue, he could get his old job back on his return to the Commons.

But there's a lot of water to go under the bridge before then - not least the fact that we will have a by-election in which the Lib Dems apparently will not put a candidate up against Mr Davis. They were the big challengers to him so it's a straight Tory/Labour battle in addition to any other third or more marginal parties which will put themselves forward.

No-one today can have any idea frankly what the consequences will be other than they are unpredictable and it's a very dangerous time for David Cameron indeed.