It's a serious allegation. Liberty's Shami Chakrabarti alleges that the government have sexed up the evidence for an extension of detention without charge to 42 days. Her claim comes because ministers have cited the example of two people alleged to have taken part in the alleged plot to blow up planes across the Atlantic in 2006. In these cases yet to come to court the suspects were held by the police for 27 and 28 days respectively - up to, in other words, the current legal maximum. 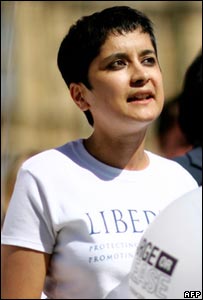 Liberty's claims are right but their defence lawyer has revealed that the police had the evidence to charge them after four days and 12 days respectively, thus demonstrating that no extension of the period allowed to the police to question terror suspects is needed.

Ministers are sure to angrily deny the charge of sexing up, a phrase that deliberately echoes the allegation made about weapons of mass destruction on the eve of the Iraq war. They will say that the police only hold suspects for as long as is necessary to gather the evidence necessary to bring the appropriate charge.

This allegation is a sign of how desperate both sides have become to sway the last few votes. Gordon Brown has taken to calling MPs who've not heard from him in two decades for long, very long, conversations.

UPDATE, 11:50AM: The government angrily reject claims that they sexed up evidence on 42 days and without talking about specific cases, point to the remarks of Sue Hemming, head of the counter-terror division in the CPS, giving evidence to the public bill committee in the House on 22 April 2008, who said:

"The idea that we have sufficient evidence after 14 days, but, for some reason best known to ourselves, wait until 26 or 27 days to charge is wrong."