Shares in Smith soared last night. As Labour MP's and peers poured out of the Parliamentary Labour Party meeting all were agreed that Jacqui the home secretary had put in the performance of her life. Some went further and claimed that this was the best ministerial performance in the past year or two. 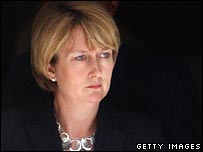 Even those Labour MPs, who still refuse to vote for 42 days - and there are still quite a few - know that the home secretary was not the one to come up with the idea. Instead she was handed this poisoned chalice by Gordon Brown.

Last night in the lobby, some even dared think whether our Jacqui might be the next leader that Labour is looking for. Who better, goes the theory, than a straight-talking Midlands mum, an Aston Villa season ticket holder, who still holidays in a caravan in North Wales to take on the Tory toff Cameron.

Labour's electoral system tends to favour women. Look at Harriet Harman's surprisingly good performance in the deputy leader contest. Now, of course, as Labour ministers keep telling me there are now no vacancies but expect the name of Smith to join those of Millibands and Purnell, Straw and Johnson in the list of candidates to succeed Gordon after he stands down or maybe after he's pushed.