Not a resigning matter

"I don't think it is". With those five words Ed Balls ends any suggestion that next week's vote on extending detention without charge to 42 days should be treated as a vote of confidence in the government. That was the question he was asked on Radio 4's Today programme this morning. 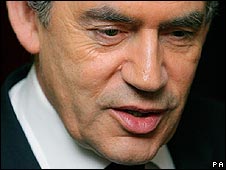 What this means is that you should discount any nudge by the whips or wink from a spindoctor that Gordon Brown's future depends on whether he wins next week or not. Let's be clear. He can lose and stay prime minister just as Tony Blair did when he was defeated on his 90-day proposal. That is not to say, of course, that defeat wouldn't have huge consequences for Mr Brown.

The prime minister's hope is that the argument which will dominate politics for the next 10 days will show that he is "taking the right long term decisions in difficult times" and is "on the side" of voters many of whom would instinctively back locking up terrorist suspects for 42 weeks without charge.

If he loses, however, people will be reminded that this is a battle he chose to fight despite having been warned as long ago as last November that:

• there was no consensus for change (he met Liberty's Shami Chakrabarti twice in one day in order to find a deal)
• that he faced parliamentary defeat
• that the director of public prosecutions, the former attorney general and former justice secretary did not support the need for change
• that MI5 would not back his arguments either privately or publicly - the spooks have let it be known that they are "neutral" on the issue
• and that many of his own ministers - not least the man he brought into government to deal with terrorism, Lord West - had had real doubts about whether this was the right priority.

Labour MPs return to the Commons today for the first time since the Crewe and Nantwich by-election. They will watch as the man dubbed the "Tory toff" fills the space once taken by Gwyneth Dunwoody. Many will be asking themselves what they should now do to avoid losing their seats.

When it comes to the vote on 42 days many Labour MPs will vote out of party loyalty, many out of conscience but the group to watch are those will vote out of self-interest. They must decide whether defeating 42 days with the consequences for Gordon Brown is more or less likely to save their skins. One thing they now know, thanks to Ed Balls, is that defeat will not trigger his immediate removal.

UPDATE, 02:50PM: Gordon Brown has, under pressure, confirmed that the 42-day vote will not be a confidence vote by declaring that it will be a "normal" parliamentary vote.

He was speaking alongside the Japanese prime minister - a man who got his job when his party sacked the previously failing leader. John Rentoul of the Independent on Sunday wrote an excellent piece about the parallels... or not.