The BBC has been inundated with calls, texts, e-mails and blog comments praising David Davis' decision yesterday and some have questioned why I have suggested it may be a nightmare for the Conservative Party.

So here are ten reasons: 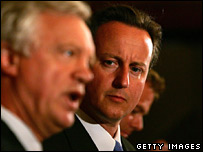 2) David Davis might lose the by-election, robbing the Tories of a talented politician

3) Davis may win big, emphasising his status as a potential rival for David Cameron

8) The Conservatives are diverted from their strategy of focusing on schools, welfare and family policies

10) For the first time in months Gordon Brown is helped to avoid dreadful headlines which today would have read ("I did no deal, honest")