Who gets the last laugh? 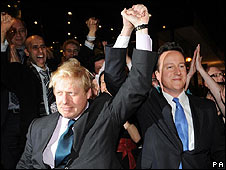 Boris - Mayor of London? What a joke, it was said. I confess that that is what I thought when first told that he was thinking of running. So much so that when I broke the story I didn't take it seriously enough to argue that it should appear on the main news bulletins.

Well, tonight the joke is on those who didn't believe that the blonde bombshell from Henley could ever unseat the man who saw off Margaret Thatcher and Tony Blair to become Mr London.

This is the first significant Tory election victory since 1992. Boris is the first Conservative to wield significant political power since John Major's defeat. What's more he is doing it in the most visible place of all - the capital city. As someone who is a friend of Dave (as he calls him) Cameron, Boris must know that his performance as Mayor could help determine whether people will take the risk of electing an untried and untested man to be their Prime Minister in two years time.

In a well judged act of generosity Boris used his victory speech to pay tribute to the man he beat as "a very considerable public servant" and to acknowledge that many who had voted for him had found their pencils wavering above the ballot paper.

Ken returned the compliment by offering to help Boris. He did an equally big favour to Gordon Brown by saying that the responsibility for his defeat lay with him and him alone.

Labour hope that Boris will prove incapable of doing the job and that this will expose David Cameron too.

The future of British politics will be profoundly affected by who gets the last laugh - Boris or those who think he'll be a joke as Mayor.