Humiliation for the PM

Westminster is still echoing to the sound of screeching political tyres. The prime minister has performed a spectacular U-turn.

No, he has not restored the 10p tax rate.

No, he is not individually compensating every loser.

No, not everyone will benefit from the changes announced today. 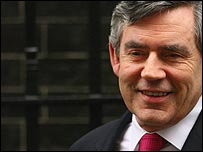 Today he has admitted that they were right and been forced to promise backdated measures to help 60 to 65-year-olds, childless couples and the young who don't benefit from the full minimum wage.

So, yes, this is a U-turn forced by the threat of a Commons defeat.

This is a humiliation he will have hated.

However, before everyone starts to write the prime minister's obituary remember that the public care much less about U-turns than the political classes; voters care whether what's done is right or wrong, not whether it's different from what was promised before.

Gordon Brown looked freer at PMQs than I have ever seen him as he fiercely defended his anti-poverty credentials and attacked the Tories for their cheek in daring to take him on on this territory.

Tony Blair's U-turn to back a referendum on the EU constitution did him little damage. Gordon Brown's problem is that, unlike Blair, he does not have a reputation as a strong leader but as a ditherer who blinks in the face of defeat. In as much as this episode confirms that view, in voters' minds it will do him real harm.