Behind the mask of a hyperlocal blogger, Ian from Tenbury Wells

The Tenbury blog serves a modest potential audience: the market town of Tenbury Wells in Worcestershire with a population of 3,796.

One of those is the blogger himself, who chooses to write anonymously.

"At first there was great interest in who was behind the blog, and most people thought it was someone else," he says.

"Once the 'secret' was out then most people found out it was me," added Ian Little.

Why the secrecy? It wasn't really anything sinister, just a sense that his identity might get in the way. "I decided not to blog under my name as the stories weren't about me but were an eclectic collection of my own random thoughts and concerns. Some subjects, brought to my attention by other residents who feel the blog is a good conduit for communication." 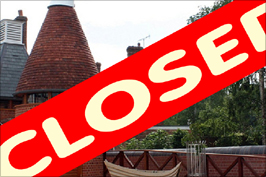 Ian has been blogging since early 2007 after he decided he needed an outlet to talk about his local community. One of the advantages of living in such a small community is that word has spread throughout the area - the blog has been mentioned by local newspapers but also picked up on by several other people who hold important positions in the town.

"My view is it's better that everyone is informed and discussing any given subject rather than being kept in the dark. I often blog on decisions made by the Town Council, this is because they are not very good at communicating themselves and they publish the minutes of their meeting many weeks after the meeting has taken place.

"I try to be quick and accurate. During severe weather events I know that many people will log on to see if I have reported. During the last flood BBC News visited the blog every hour. I know the blog is read by people at various universities, local newspapers and even the House of Commons. Many of the local town, district & county councillors also read it but I don't know how frequently.

"I get feedback from people thanking me for the coverage as they feel the blog is likely to be more accurate than the larger news organisations."

He also Tweets stories as they break to make the process even quicker, but what Ian does can be simply put down to talking to people and making sure he knows what's going on.

"The community is quite small so usually I have a reasonable idea what is happening. I do belong to a number of groups and attend a lot of meetings. People also point me in the direction of possible stories or point other people in my direction; I talk to anyone and everyone.

"The PR company working for Tesco identified the blog as a valid local media site and send me press releases about the proposed development. This has led to some people feeling that I 'work for Tesco' as I am able to publish the press releases on average 24 hours ahead of the traditional press."

This kind of access can be what helps hyperlocal blogs to thrive. Ian urges other people to blog about their own communities and is pleased to get comments from readers saying that the site also works as a social history of the area. What better resource for the community?

I'm Nick Booth of Podnosh, and here we explore the world of hyperlocal, or very local, web sites. I'll be writing about the communities and volunteers who use the web to reflect on life at street level or hold power to account. To begin with this will concentrate on activity in the West Midlands.

You can stay up to date with Nick Booth's blog via these feeds.

There are a few places where you can get help to run your own local blogs, including support for community groups who want to write about their work.