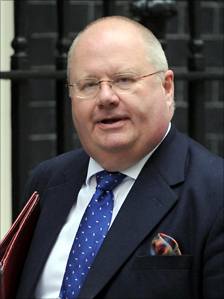 Eric Pickles, the Secretary of State for Communities and Local Government, clearly seems to understand how hyperlocal bloggers can help hold power to account. He is telling local authorities to let them into meetings and allow them to film (or record?) those meetings.

"To ensure all parts of the modern-day media are able to scrutinise Local Government, Mr Pickles believes councils should also open up public meetings to the 'citizen journalist' as well as the mainstream media, especially as important budget decisions are being made.

"Local Government Minister Bob Neill has written to all councils urging greater openness and calling on them to adopt a modern day approach so that credible community or 'hyper-local' bloggers and online broadcasters get the same routine access to council meetings as the traditional accredited media have."

This is an important shift in how government understands the relationship between itself, the media and citizens. I hope it also applies to Parish Councils - if so I think it's almost there.

The problem above is the word "credible" . It's a word that local authorities can use to control access to their meetings. A local authority can still argue that their local bloggers are not "credible". Ironically that might make things worse - because a citizen is entitled to sit in a council meeting - maybe a hyperlocal blogger deemed not "credible" would be turfed out?

Clearly common sense will prevail in most places but this idea appears to encourage us to think that local bloggers are some sort of journalist first. In truth most of them of unquestionably citizens first - hence their value in the battle for transparency.

There will be calls for Mr Pickles to take a further step - the one being suggested by Chris Taggart who sits on the Local Government Open Data panel - and to declare that any citizen is entitled to record any public council meeting.

A blog featuring nostalgia from 1940s and 1950s Bournville has recently started up. Early Days in Bournville is the work of Bernard, a retired mechanical engineer who no longer lives in the area but has fond memories of it from his childhood. I found it through this post at the Bournville Village blog.

A mixture of photographs and reminiscences, Bernard's memories of the area are set against the background of the Cadbury's factory:

Before I was born, my mother worked, I believe in the export office and my father, after a spell with George Masons, the grocery chain, went to work at Cadbury's and was simply classified as a 'Confectioner'. I have no other information on what he actually did in his first years there, other than this rather broad description.

So, basically, he made chocolates! They didn't actually meet each other from being at the same place of work, although Cadburys were well known for providing excellent social facilities (clubs and dances etc). My father told me that he was a good friend of Stan, my mother's younger, and only brother, and that he spent many hours 'round at his mates house', in Linden Road.

His isn't the only blog which talks about Bournville's past - the Bournville Village Council has a wonderful collection of vintage film of Maypole dancing at the summer fayre:

Local history is stashed in the heads and attics of local people - these sites are a perfect way of sharing it.

Transition Shipston is "a grassroots movement working to build local resilience against the threat of oil depletion and climate change within Shipston-on-Stour and its surrounding villages", and with Transition Stratford they've recently launched a scheme called Sustainable Energy For Historic Buildings.

The aim of the initiative is to reduce the energy use and carbon emissions of older buildings. The initiative will seek to preserve older buildings so that they can continue to be used in a low carbon, low energy future affected by climate change and avoid the waste of the energy already used in their construction. 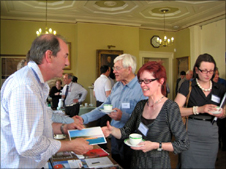 This is all about preserving the past to help the local environment of the present and the future and make sure this is sustainable. So it's a great example of communities being active online and looking to work with other organisations, approaching local businesses, local authorities and local media to help make it a reality.

You can read more about their plans for the scheme here, and follow the blog to keep up to date with how it develops.

What's most interesting about this is that there's a network of local sites which are linked together by common aims, and with examples like the one above those local groups are organising and working together to take action collectively. The Transition network summarise their work for tackling environmental challenges here:

In towns and cities all over the world people are asking each other "what can we do about this?". What fascinates me...is the emerging culture that underpins this work. We are communities, a society, a world in transition, and to do that we need a culture of transition, but also the tools for manifesting it.

So it's not just trying to improve their own local areas, but helping each other take action wherever they live - meeting and organising online but also coming together offline, like in the photo above. And that's one of the big foundations of hyperlocal blogs.

I'm Nick Booth of Podnosh, and here we explore the world of hyperlocal, or very local, web sites. I'll be writing about the communities and volunteers who use the web to reflect on life at street level or hold power to account. To begin with this will concentrate on activity in the West Midlands.

You can stay up to date with Nick Booth's blog via these feeds.

There are a few places where you can get help to run your own local blogs, including support for community groups who want to write about their work.

Behind the mask of a hyperlocal blogger, Ian from Tenbury Wells

The Tenbury blog serves a modest potential audience: the market town of Tenbury Wells in Worcestershire with a population of 3,796. One of those is the blogger himself, who chooses to write anonymously. "At first there was great interest in...

Image by Alan Stanton - https://www.flickr.com/photos/alanstanton/with/2749506672/Hyperlocal blogs don't just share community news, often they also give you an insight into how people feel about their neighbourhoods. The Longton South blog covers news and events in this part of Stoke-on-Trent...

Cold weather and snow are a great example of how citizens blogging at a hyperlocal level are helping to guide their neighbours on what to do and what they need to be aware of. One of the finest examples of...

A good hyperlocal blog doesn't just serve a community, it serves the people who write it. It will often unlock a greater sense of civic pride in the bloggers as well as the people living in the community they blog...