Error: Too many requests have been made during a short time period so you have been blocked.

This page hasn't been updated for a while. We've left it here for reference More information 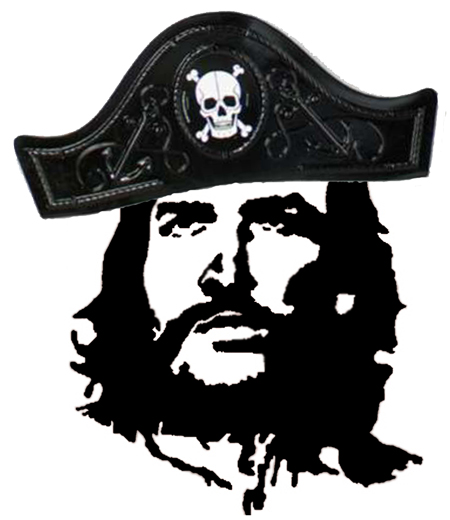 A couple of years ago I was driving my son, who was 6 at the time, to a birthday party. It was - once again - a 'pirate' theme, and as I looked at him dressed up in his sawn-off trousers and cardboard cutlass, I began to think: what is it about pirates? How come he's not been invited to any 'aggravated robbery' themed parties?

Pirates, you soon realise, are everywhere. Their 'Jolly Roger' motif is found in the most surprising of places - skulls and crossed bones on baby bottles, skateboards, comforters and executive ties. There are pirate radio stations, pirated DVDs, members of the European Parliament from the Pirate Party - not to mention the swashbuckling, rum-swilling mutineers of the Hollywood franchises, nor their contemporaries who patrol the seas off Somalia.

My new book - Mutiny! Why We Love Pirates and How They Can Save Us - rose out of the question that pressed me: what, if anything, could all of these different pirates have in common? My hunch is this: pirates emerge whenever things that should be held in common are enclosed into private ownership.

The traditional pirates of the Caribbean emerged in the midst of a great struggle between England and Spain to enclose the vast commons of the lands and oceans of the New World. Sailors on naval ships on both sides were instructed to attack and plunder one another, and merchants exploited local resources with slave labour to generate huge profits for themselves. None of this wealth was shared with the sailors who made it possible. Naval crews were treated brutally, fed terribly and paid almost nothing. They had often been kidnapped from the streets of cities and taken away from their families.

The decision to 'turn pirate' was thus an act of self-determination. They would no longer put up with the awful inequality on board. Pirate ships were run on democratic principles, and 'booty' was shared equitably among the whole crew. If pirates were injured in service, they were paid handsomely from the common purse (a lost limb might gain them £20,000 in today's money). The clichéd picture of the pirate with the hooked hand, wooden leg and eye patch tells us that those who were injured or disabled were still accepted.

Yes, pirates were thieves, but their thievery was no more than what they had been trained to do, and no more than what the Royal Naval ships were doing on both sides too. Pirates rose up from a place of oppression and alienation, and created spaces within which there was freedom and equality. They fought to return the commons to the people.

We can see this same principle in the emergence of pirate radio, which grew out of the refusal by the BBC to broadcast any more than a couple of hours 'pop' music each week. We can see it in the work of 'Henry Hill the Book Pirate,' who published uncensored news 'for the benefit of the poor' and had his illegal printing presses smashed repeatedly by the Crown authorities in 1707. We can also see it in the way Somali pirates began - their fishing waters poisoned and emptied, and their waters now a shipping channel for container ships transporting billions of dollars of consumer goods to the West.

However, as well as examining piracy in the material realm, in the book I look at how pirates can function in terms of religion and personal development too. Drawing on pirate themes in Star Wars, Peter Pan and the Odyssey, I think we can see how pirates within literature function to help us break out of personal and spiritual enclosures too. Wasn't Jesus' mission essentially to break religion out of the enclosures that legalists had erected around it, and return it to 'the commons?' In the clearing of the temple, wasn't he removing the profiteers and gatekeepers who sought to make money from the faithful, freeing up access to anyone who needed forgiveness, regardless of wealth or status?

In a world where consumer capitalism is utterly dominant, it can be hard even to imagine spaces where the profit motive is not the primary driving force. But as we lurch from one economic crisis to another, and as the church continues to be rocked by revelations of improper use of power, it feels high time for pirates to emerge again and do battle for the commons once more.

Kester Brewin
Mutiny is available as a paperback, hardback and e-book here: https://www.kesterbrewin.com/pirates

Share this page
Error: Too many requests have been made during a short time period so you have been blocked.

This information is temporarily unavailable.