Dinosaurs on the Ark 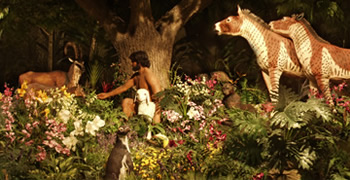 I thought I'd left the Grand Canyon behind when I moved on to Cincinnati. But, just thirty minutes from the airport, in Petersburg, Kentucky, I found myself studying the vast expanse of Arizona's desert at the Creation Museum. Founded just five years ago by the Creationist organisation Answers in Genesis, the museum has already attracted 1.6m paying visitors (it's about $25 per adult) and continues to draw in nearly three hundred thousand people each year during a recession.

The first thing you see when you arrive at the $35m museum is very large toy dinosaur, right outside the main entrance. Inside, there are many more. Dinosaurs are a bit of a theme here. My guide, Mark Looy, one of the co-founders of the Museum (with Ken Ham and Mike Zovath) explains that dinosaurs were chosen as a key focus of the museum because they attract such intense media attention, interest children and young people, and illustrate some of the decisions about global history that need to be made by biblical Christians. And there hasn't been much of global history according the museum's young earth creationists: in essence, they agree with James Ussher, the 17th century Archbishop of Armagh, that the world was created just six thousand years ago (Ussher was more precise: 23 October, 4004BC). Which means that dinosaurs existed alongside human beings -- and they entered Noah's Ark two-by-two. (Maybe that's why one of the dinosaurs is wearing a saddle; visiting children can have their photograph taken sitting on its back.)

On Canyons and Culture Wars 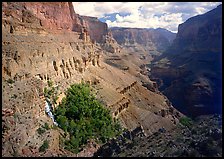 I'm at the Grand Canyon in Arizona, spending a few days with the other Eisenhower Fellows and comparing notes on the various places we've visited and people we've met. Each Fellow is following a bespoke research plan, but, in a sense, we're all trying to understand the place of the US in the world today.

So far, I've been to Philadelphia (America's fifth largest city), Washington DC, Nashville and Dayton in Tennessee, Los Angeles and San Francisco. While in LA, I fell victim to that city's appalling air pollution: you can see the smog hanging over the streets. I caught a bout of acute bronchitis and had to spend eight hours in a downtown hospital's Emergency Department. It's nothing like "ER"; no, I wouldn't recommend it. LA isn't really a city; it's a clump of cities linked together by freeways. I visited Pasadena to meet Richard Mouw, president of Fuller Theological Seminary (now the world's largest seminary) and had lunch with three world-class historians of science at CalTech (the California Institute of Technology).