How "progressive" is Jim Wallis? 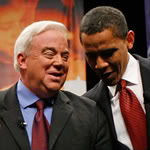 Jim Wallis has become the face of "progressive" Christianity in the United States. He's the founder of Sojourners magazine and the Sojourners community in Washington DC. He's also the author of bestselling books including God's Politics: Why the Right Gets It Wrong and the Left Doesn't Get It; and he has served as a spiritual advisor to President Obama.

Social justice has been a consistent theme of Wallis's life and ministry, particularly justice for the poor and the vulnerable. But his "progressive" credentials are now being challenged by campaigners and commentators in the US after Wallis's online magazine refused to run a video-ad from Believe Out Loud, a group supporting the full inclusion of lesbian and gay Christians within the church.

Wallis has published a "statement" on the Sojourners website. He says his organization is merely recognizing that this is an issue that divides Christians and churches and he doesn't want Sojourners to be distracted from its primary focus on social justice and defeating poverty and inequality. Read a few of the angry comments on the thread below his statement and you get a sense of how some supporters of the Sojourners mission are responding to his decision. Believe Out Loud have published their response to the controversy here. They say this kind of controversy is what Believe Out Loud was founded to address: "to foster among ... those who silently believe in gay rights but have yet to act ... a willingness to have the hard conversation, to voice their inner belief in equality and reverse their congregation's public silence on LGBT inclusion."

Sarah Posner, author of God's Profits: Faith, Fraud, and the Republican Crusade for Values Voters, has posted on the theological battle that's now being fought on Twitter.

Tim King, communications director at Sojourners, has posted on a related theme, and his post includes the Believe Out Loud video-ad with an editorial explanation that Sojourners is committed "first and foremost in dialogue on difficult issues within our editorial pages and we typically do not sell display advertising relating to issues amongst people of faith that have unfortunately and too often been reduced to political wedge issues."