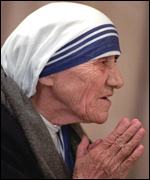 Mother Teresa of Calcutta was born on this day one hundred years ago. A special mass celebrating her birth, life and missionary work in India was held just a few hours ago in the city of Calcutta. A message was read out from Pope Benedict celebrating "the inestimable gift that Mother Teresa was in her lifetime". Yet Mother Teresa, who earned the Nobel Peace Prize in 1979 and was beatified by the church in 2003 -- the first stage in being declared a saint -- continues to be a controversial figure. The new atheist writer Christopher Hitchens gave evidence at the church's beatification hearings in 2003, as did the Indian doctor and writer Aroup Chatterjee. These were the only "hostile" witnesses whose evidence was heard by church authorities and both have published books setting out their moral case against Mother Teresa. On Sunday, we'll debate the legacy of the missionary who was regarded as a "living saint" but who is in danger of becoming a enduring controversy with Aroup Chatterjee, author of Mother Teresa: The Final Verdict and John Scally, author of Mother Teresa: The Irish Connection.