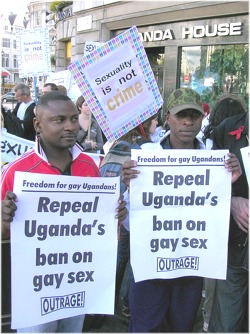 The Ugandan government says their new anti-homosexuality bill seeks to strengthen "the nation's capacity to deal with emerging internal and external threats to the traditional heterosexual family." The bill's language ("committing the offence of aggravated homosexuality") reads like a bad joke, but there is nothing funny about a law that sponsors the execution of gay and lesbian people.

Remember: this is not a debate about the rights and wrongs of homosexuality in the eyes of the public. This is a debate about a proposed law that would permit the Ugandan state to execute any gay or lesbian person if they repeatedly engage in same-sex sexual relationships. Homosexuality has always been illegal in Uganda. This new law will increase the penalties for homosexuality to include judicial killing.

Some public commentators in Uganda have spoken out strongly and clearly against this homophobic legislation, describing it as distinctly un-Christian, but others have offered stridently homophobic commentary that sounds like something from a Nazi-era pamphlet. Andrew Brown, writing in The Guardian, describes the new law as a "gay witch hunt" and asks why English Anglican leaders have been so publicly silent.

The Anglican Church of Uganda's position on the bill has outraged churches in the west. While opposing the death penalty, the Ugandan Anglican leadership says "homosexual behaviour is immoral and should not be promoted, supported or condoned in any way".

Ugandan Anglican Bishop Joseph Abura, from the Karamoja Diocese, has hit back at western Christians who have challenged the bill. His article merits a moral health warning: his words will be regarded as extremely homophobic by many people. He writes:

"Homosexuality and lesbianism is now being exported to the rest of the world, to Africa and Latin America, and elsewhere. They want to coerce African parliaments like the Ugandan one to condone and legitimize the vice. They want it to become a virtue. God forbid. But, should lesbianism and homosexuality be left to thrive and invite God's judgment upon the world? Can't this illness like HIV/AIDS be fought? AIDS/HIV is not against the Bible and the Word of God, but homosexuality does because it is spiritual. Why accept to compromise and destroy self and entire human race? Yes, God punishes sin, He punishes all sin. "The wages of sin is death"" (Romans 6:23), eternal death. The world then has to be punished."

It is important to understand that, although the west has increasingly given legal protection to lesbians and gays in the past thrity years, in many African cultures homosexuality is widely seen in starkly negative terms as a thread to traditional and tribal values. That is why Bishop Abura regards any comment from western churches or governments on this question as a form of cultural aggression. "Christianity in Africa is under attack by Gays and Christians in Europe and the Americas, " he writes. "Africans do not need Europeans to teach them what the Gospels say ... The vice of homosexuality through the necessary laws in place can be checked."

Veteran Catholic journalist John Allen has questioned the silence of Uganda's Catholic bishops in the face of this homophobic onslaught. 40 per cent of Uganda's population of 32 million are Catholic.

The bill was introduced in Uganda's parliament by David Bahati, who describes himself as a "born-again Christian". Some evangelical leaders in Britain and the United States have written to oppose the bill, including leading Christian ex-gay ministries such as Exodus International, and the legislation has been attacked by human rights campaigners, foreign policy experts, and parliamentarians around the world.

The intervention by Exodus International is particularly important, since this is an organisation that offers ministry to encourage gay people to step away from homosexuality. Don Schmierer from Exodus has written to the Ugandan president in opposition to the proposed law. He writes:

"While we do not believe that homosexual behavior is what God intended for individuals, we believe that deprivation of life and liberty is not an appropriate or helpful response to this issue. Furthermore, the Christian church must be a safe, compassionate place for gay-identified people as well as those who are confused about and conflicted by their sexuality. If homosexual behavior and knowledge of such behavior is criminalized and prosecuted, as proposed in this bill, church and ministry leaders will be unable to assist hurting men, women and youth who might otherwise seek help in addressing this personal issue."

Commentators agree that the anti-homosexuality bill is likely to pass into law soon. Some critics have described the bill as a mandate for gay genocide. Read the proposed legislation for yourself and decide for yourself if that seems like an overstatement.