Chomsky on religion and the ethics of war 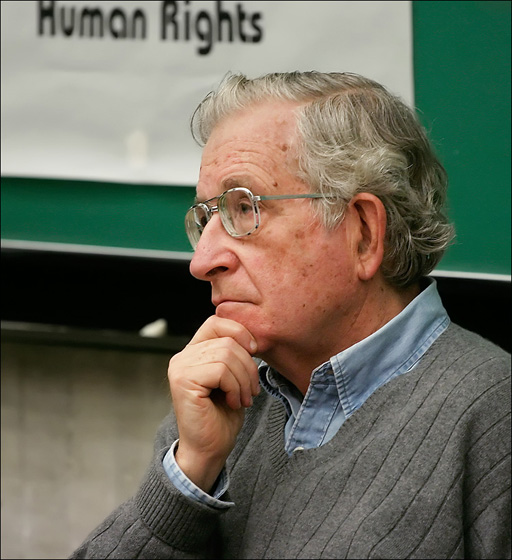 "I don't join the New Atheists. So, for example, I wouldn't have the arrogance to lecture some mother who hopes to see her dying child in heaven -- that's none of my business ultimately. I won't lecture her on the philosophy of science."

That's how Noam Chomsky responded today, during our conversation about politics and religion. (LIsten to the interview here.) While Dawkins, Harris and Hitchens challenge the claim that religion has made any constructive contribution to the world, Chomshy lauded the sacrificial work of the murdered Archbishop Oscar Romero and the social critique of liberationist theology.

When I asked him for contemporary examples of religion making a positive contribution, he told me this: "The Catholic Bishops Conference in the United States comes out with statements that are so progressive that the press won't report them. The Pope's new year messages are often not reported because they would be considered so far 'to the left' (whatever that means in the US spectrum)."

Though himself an atheist or agnostic, Chomsky opposed both the tone and the focus of the new atheist movement. Here's another excerpt from today's interview:

Chomsky: "I'm not impressed with it, frankly. And I don't think they address the concerns, feelings and commitments of seriously religious people. Yes, they do address the concerns of people who think the world was created ten thousand years ago, but they're not going to listen to these arguments -- not in the arrogant form in which they are presented. Discourse is possible. And if people want to believe in, say, a future life, or a divine figure, that's their right. What does bother me much more is, for example, reading publications from the Hoover Institute at Stanford University which describe Ronald Reagan, their divinity, as a 'colossus' striding over the country whose spirit looks over us like a loving ghost.

Chomsky: "Yeah, I'm almost literally quoting. When secular figures are turned into divinities, they way they are in Peian Yang or Stanford University -- that I don't like."

We also talked about pacifism and the justification of war. Noam Chomsky denied that he was a complete pacifist. He supported the Allied military response to Hitler, and when pressed he accepted that the British intervention in Sierra Leone was justified. But, in general, he said, the case for war is a very hard sell, and governments turn to military action much too easily, without fully exhausting peaceful means.

Noam Chomsky was speaking to me, ahead of his visit to Belfast next week. He'll be giving this year's Amnesty International Lecture on Friday evening. That event has been sold out for quite some time, but the lecture and audience event will eventually be screened online on the Amnesty website.