The pope and the economists 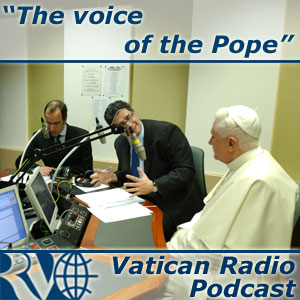 The global recession is hurting the central finances of the Catholic Church. Vatican Radio, which is run by the Jesuits and headed by the director of the Vatican Press Secretary, Fr Federico Lombardi, is now planning to carry advertising because the church is no longer able to fully finance it.

I've a personal connection with Vatican Radio: I was vox-popped on the station while on a student trip to Rome, and that was the first time my voice was heard on radio. Read the official history of Vatican Radio here, which ends, "We invite you to Listen for Heaven's Sake!" I wonder if the Vatican will be taking ads fromAntonio Federici's ice cream.

Pope Benedict has been thinking a lot about the credit crunch in the past few months. We now have the full text of Caritas in veritate (Charity in truth), his encyclical letter dealing with ethics and the economy. (Incidentally, the Vatican runs a very useful website featuring significant church documents, including this encyclical.) We'll be examining Caritas in veritate in some detail on Sunday morning. See below the fold for a summary of the key ideas in the document.

I've just finished reading the encyclical and it is a wide-ranging essay on the values and dynamics shaping our modern economic life -- such as globalisation, population growth, development economics, the environment, international aid, migration, subsidiarity, and international co-operation -- and the need for a fully-worked out ethical approach to those issues:

"Striving to meet the deepest moral needs of the person also has important and beneficial repercussions at the level of economics. The economy needs ethics in order to function correctly -- not any ethics whatsoever, but an ethics which is people-centred." (chapter 4, 45)

"Finance, therefore -- through the renewed structures and operating methods that have to be designed after its misuse, which wreaked such havoc on the real economy -- now needs to go back to being an instrument directed towards improved wealth creation and development." (chapter 5, 65)

The document offer a predictably strongly-worded statement on the ethics of sustainable development:

"The international community has an urgent duty to find institutional means of regulating the exploitation of non-renewable resources, involving poor countries in the process, in order to plan together for the future." (chapter 4, 49)

Sustainability is not only an environmental concept. The encyclical also calls on wealthy countries to increase international aid to under-developed economies:

"In the search for solutions to the current economic crisis, development aid for poor countries must be considered a valid means of creating wealth for all. What aid programme is there that can hold out such significant growth prospects -- even from the point of view of the world economy -- as the support of populations that are still in the initial or early phases of economic development? From this perspective, more economically developed nations should do all they can to allocate larger portions of their gross domestic product to development aid, thus respecting the obligations that the international community has undertaken in this regard." (chapter 5, 60)

Intriguingly, the Pope also wishes to encourage cultural tourism -- the kind of traveling and exploring that helps break down cultural barriers and enables people to relate to others as brothers and sisters in a single human family. (See chapter 5, 61). He contrasts this kind of tourism with sex tourism and other forms of exploitative traveling.

The letter also mentions the importance of the family at the centre of many of the key issues in our world today. An example of that:

"It is thus becoming a social and even economic necessity once more to hold up to future generations the beauty of marriage and the family, and the fact that these institutions correspond to the deepest needs and dignity of the person. In view of this, States are called to enact policies promoting the centrality and the integrity of the family founded on marriage between a man and a woman, the primary vital cell of society, and to assume responsibility for its economic and fiscal needs, while respecting its essentially relational character." (from chapter 4, 44).

Pope Benedict's comments on financial regulation are likely to get most attention in press coverage:

"Financiers must rediscover the genuinely ethical foundation of their activity, so as not to abuse the sophisticated instruments which can serve to betray the interests of savers. Right intention, transparency, and the search for positive results are mutually compatible and must never be detached from one another. If love is wise, it can find ways of working in accordance with provident and just expediency, as is illustrated in a significant way by much of the experience of credit unions." (chapter 5, 65)

The Pope calls for a more inclusive role for investors, savers, and consumers more generally, and wants to see reforms in global financial institutions:

"In the face of the unrelenting growth of global interdependence, there is a strongly felt need, even in the midst of a global recession, for a reform of the United Nations Organization, and likewise of economic institutions and international finance, so that the concept of the family of nations can acquire real teeth." (chapter 5, 67)

The Pope also has something to say about social networking technologies and other new media, which is transforming human communication. Humans are fascinated by those developments, but the Pope recommends caution in the way we embrace new technologies:

"Just because social communications increase the possibilities of interconnection and the dissemination of ideas, it does not follow that they promote freedom or internationalize development and democracy for all. To achieve goals of this kind, they need to focus on promoting the dignity of persons and peoples, they need to be clearly inspired by charity and placed at the service of truth, of the good, and of natural and supernatural fraternity. In fact, human freedom is intrinsically linked with these higher values. The media can make an important contribution towards the growth in communion of the human family and the ethos of society when they are used to promote universal participation in the common search for what is just." (chapter 6, 73)

Perhaps the most strongly-worded section of this encyclical has to do with new bio-technologies:

"To the tragic and widespread scourge of abortion we may well have to add in the future -- indeed it is already surreptiously present -- the systematic eugenic programming of births. At the other end of the spectrum, a pro-euthanasia mindset is making inroads as an equally damaging assertion of control over life that under certain circumstances is deemed no longer worth living. Underlying these scenarios are cultural viewpoints that deny human dignity. These practices in turn foster a materialistic and mechanistic understanding of human life. Who could measure the negative effects of this kind of mentality for development? How can we be surprised by the indifference shown towards situations of human degradation, when such indifference extends even to our attitude towards what is and is not human? What is astonishing is the arbitrary and selective determination of what to put forward today as worthy of respect. Insignificant matters are considered shocking, yet unprecedented injustices seem to be widely tolerated. While the poor of the world continue knocking on the doors of the rich, the world of affluence runs the risk of no longer hearing those knocks, on account of a conscience that can no longer distinguish what is human. God reveals man to himself; reason and faith work hand in hand to demonstrate to us what is good, provided we want to see it; the natural law, in which creative Reason shines forth, reveals our greatness, but also our wretchedness insofar as we fail to recognize the call to moral truth." (chapter 6, 75)

Pope Benedict also fears a growing sense of alienation amongst the human population in the highly developed world. People are so focused on work and wealth and growing their material stores that they are losing touch with themselves. They are turning to pharmaceuticals to help. Drugs can only do so much, he says; the solution to that alienation and profound unhappiness lies much deeper:

"The human being develops when he grows in the spirit, when his soul comes to know itself and the truths that God has implanted deep within, when he enters into dialogue with himself and his Creator. When he is far away from God, man is unsettled and ill at ease. Social and psychological alienation and the many neuroses that afflict affluent societies are attributable in part to spiritual factors. A prosperous society, highly developed in material terms but weighing heavily on the soul, is not of itself conducive to authentic development. The new forms of slavery to drugs and the lack of hope into which so many people fall can be explained not only in sociological and psychological terms but also in essentially spiritual terms. The emptiness in which the soul feels abandoned, despite the availability of countless therapies for body and psyche, leads to suffering. There cannot be holistic development and universal common good unless people's spiritual and moral welfare is taken into account, considered in their totality as body and soul." (chapter 6, 76)

Near the end of the letter, there is an appeal for "Christian humanism". The pope clearly sees the rise of modern atheistic humanism, but he's unimpressed:

"[M]an cannot bring about his own progress unaided, because by himself he cannot establish an authentic humanism. Only if we are aware of our calling, as individuals and as a community, to be part of God's family as his sons and daughters, will we be able to generate a new vision and muster new energy in the service of a truly integral humanism. The greatest service to development, then, is a Christian humanism that enkindles charity and takes its lead from truth, accepting both as a lasting gift from God. Openness to God makes us open towards our brothers and sisters and towards an understanding of life as a joyful task to be accomplished in a spirit of solidarity. On the other hand, ideological rejection of God and an atheism of indifference, oblivious to the Creator and at risk of becoming equally oblivious to human values, constitute some of the chief obstacles to development today. A humanism which excludes God is an inhuman humanism. Only a humanism open to the Absolute can guide us in the promotion and building of forms of social and civic life -- structures, institutions, culture and ethos -- without exposing us to the risk of becoming ensnared by the fashions of the moment." (Conclusion, 78)