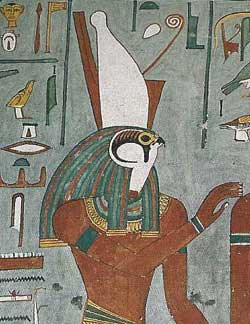 Bill Maher's film Religulous redeploys the claim, often made, that the biblical story of Jesus is a re-run of the Egyptian myth of Horus.

Did the writers of the New Testament 'borrow' from a older myth? Is the gospel account a kind of mthological plagiarism? It's said that Horus, like Jesus -- or Jesus, like Horus -- was born of a virgin, had twelve disciples, walked on water, delivered a 'sermon on the mount', performed mircles, was executed beside two thieves, rose from the dead and ascended into heaven.

We'll be exploring the similarities between Horus and Jesus on Sunday morning, with an Egyptologist, a humanist and a Christian theologian.