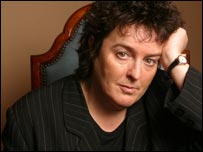 Carol Ann Duffy, Britain's twentieth poet laureate, and the first woman to be appointed to the position, was once asked if she thinks poetry 'to some extent takes the place of religion' in a secular society. She replied, 'It does for me: I don't believe in God.' Her sonnet 'Prayer' is the voice of that secular spirituality:

Some days, although we cannot pray, a prayer
utters itself. So, a woman will lift
her head from the sieve of her hands and stare
at the minims sung by a tree, a sudden gift.

Some nights, although we are faithless, the truth
enters our hearts, that small familiar pain;
then a man will stand stock-still, hearing his youth
in the distant Latin chanting of a train.

Pray for us now. Grade 1 piano scales
console the lodger looking out across
a Midlands town. Then dusk, and someone calls
a child's name as though they named their loss.

Darkness outside. Inside, the radio's prayer -
Rockall. Malin. Dogger. Finisterre.

Listen here to Carol Ann Duffy read some of her poems.