What happened in the 1859 Revival? 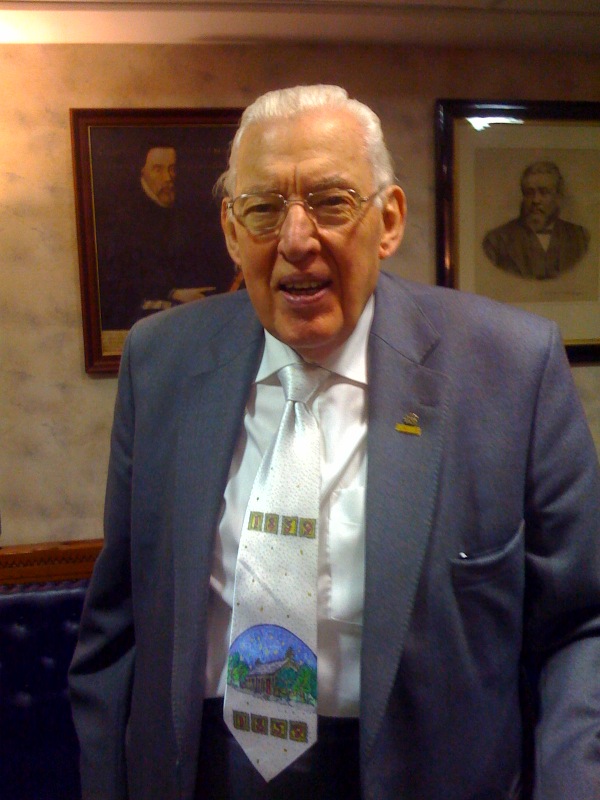 I took this picture of Ian Paisley yesterday at the launch of the new edition of his history of the 1859 Revival. Dr Paisley is standing in the vestry of Martyrs' Memorial Free Presbyterian Church, where we had just finished recording a fascinating interview about the revival, which you can hear on Sunday morning. He's wearing a very striking tie that was painted, for the occasion of the book launch, by his daughter, the artist Rhonda Paisley.

The year 1859 is perhaps better known as the year of publication of Darwin's Origin of Species -- which is being commemorated widely this year -- but the religious revival of that same year has a massive impact on the cultural landscape of Ireland. Some suggest that the revival produced as many as 100,000 converts, mostly in the north-east of Ireland.

It's fair to say that Ian Paisley is a child of the 1859 Revival. He came to faith in a Baptist church that was founded as a result of the revival -- just one of many churches in Northern Ireland that were established in an effort to respond to the new and growing population of churchgoers. If today's Northern Ireland is known for its conservative religious landscape, that landscape was in great measure shaped by the great religious revival of 1859. If you want to understand Protestantism (and particularly Presbyterianism) within Northern Ireland in the 20th century, you need to examine what happened in 1859.

Ian Paisley wrote his account of the revival in 1959, marking its centenary, and his text soon became an important work of reference for future students of the revival. Since then, there have been quite a few books and papers by historians, sociologists, psychologists, theologians and other specialists, which have examined this important moment in the history of Ireland from various religious and scientific perspectives.

A key question, and its one I explored with Dr Paisley, is why this awakening happened when it did. There seemed to be a domino effect of conversions, beginning with an earlier revival in the United States, which calls for some explanation. Was the economic crisis facing Ireland at the time part of the story? Did people turn to religion as a desperate response to that crisis? How do we explain the strange physical phenomena that accompanied the revival: people falling in their place inside churches or on the roads outside churches, sometimes crying, sometimes laughing, sometimes begging to be told how they may be "saved". Can these accounts be explained simply as "mass hysteria"?

I am currently doing some research into the revival for a BBC radio documentary to be broadcast later this year. It's a dramatic story and a remarkable episode in the religious history of Ireland which merits some serious investigation in this anniversary year. Feel free to add your views on the revival here -- or on religious revivals, construed more generally.